The negative effects of free radicals can be efficiently fought by polyphenols, the natural antioxidants of which OLIVIE is so rich in

Free radicals are atoms, molecules, or ions with unpaired electrons. Because of their feature the free radicals are extremely reactive and easily able to react with any molecule around (carbohydrates, lipids, nucleic acids) damaging it and compromising very often its functions. Moreover, by reacting with others molecules, they are able to spread and set a chain reaction that may cause huge damages to the cell. Every cell produces free radicals in normal conditions: enzymatic reactions, oxidative phosphorylation, and immunity defence. The body easily tolerates them in small quantities, and inactivates them by enzymatic systems like glutathione and other antioxidants called scavengers for their ability to neutralize the free radicals. When too many free radicals are produced a so called oxidative stress occurs. The enzymatic systems and the intracellular antioxidants cannot face the overproduction and the free radicals cause a cellular damage that can be both reversible, when the cell goes back to normal condition, or irreversible with a consequent cell death by apoptosis or necrosis. 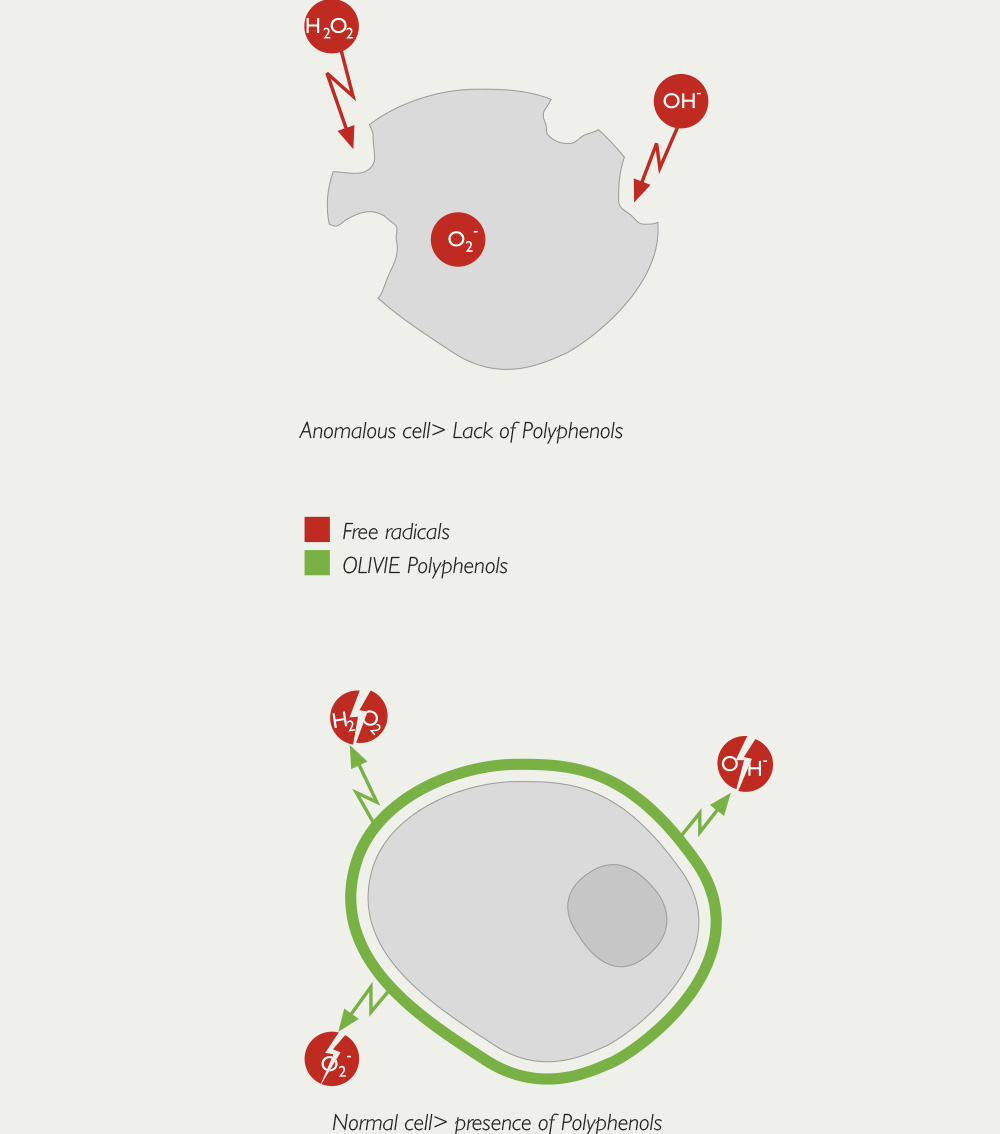 THE NEGATIVE EFFECTS OF FREE RADICALS.

Free radicals are one of the main cell damage mechanisms. They mainly attach to three components of the cell: lipids, proteins and nucleic acids.
• The lipid peroxidation, in particular of the plasma membrane of the intracellular organelles is a cellular damage caused by the different types of free radicals that, in presence of oxygen, react with the membrane lipid double links generating some lipid peroxides.
These latter react and spread out causing a damage that reaches the membrane. The degradation of the lipids caused by the free radicals is shown by the presence of Advanced Lipoxylation End-products (ALEs, Advanced Lipoxylation End-products) such as 4-hydroxy-nonenale (4) HNE) and the malonyl-dialdeide (MDA).
• Protein oxidation occurs when free radicals (that oxidize the side groups of amino acids) damage the protein function. They also promote the creation of crossed links like the disulphide bond altering its structure or its bending and may cause modified amino acids.
• The damage to the DNA occurs when free radicals alter the chemical structure of the nitrogenous bases by causing mutations or by creating new ones. This kind of damage is one of the causes of the cell ageing and it is a cancer promoter. The oxidative stress is nowadays associated to hundred more human pathologies (like fibroplasia retrolenticolare, atherosclerosis, hypertension, Parkinson’s disease, Alzheimer’s disease, diabetes insipidus, colitis, rheumatoid arthritis, favism, etc.) and one of the cause of ageing can be efficaciously kept under control by antioxidant substances.

As a result, the antioxidants are chemically named reducing agents – like thiols or polyphenols since the involved chemical reactions are of oxide-reduction. Plants and animals keep complicated systems of antioxidants. Like glutathione, C and E vitamins, enzymes like catalase, superoxide dismutase and various peroxidases. A too low level of antioxidants or inhibition of the antioxidant enzymes is a cause of oxidative stress and can damage and even kill the cells. Oxidative stress represents an imbalance between the systemic manifestation of reactive oxygen species and a biological system’s ability to readily detoxify the reactive intermediates or to repair the resulting damage. The balance between oxidants and antioxidants is of the utmost importance to keep the natural wellness of our body.

POLYPHENOLS AGAINST THE OXIDATIVE STRESS.

Polyphenols are a family of about 5,000 organic molecules largely present in the plant kingdom. As their name reads, polyphenols are characterised by the presence of different phenol groups associated in more or less complicated structures that often have a high molecular weight. Polyphenols are natural antioxidants present in plants (polyphenolic trace elements of the bioflavonoid type like Procyanidin, Proanthocyanidins, Leucoanthocyanidins, pycnogenols, tannins etc.). They are useful to prevent the lipoproteins oxidation and to seize free radicals. Positive biomedical effects are also proved against cardiovascular diseases, senescence diseases, and against cancer growth.